The number of US patents granted each year depends not only on inventor ingenuity, but also on the allocated budget and administration policy at the U.S. Patent and Trademark Office (USPTO), both of which impact staffing levels and directives to the Examiners.  As of yet (June 2021), there has not been a nomination by the President for the Under Secretary of Commerce for Intellectual Property and Director of the USPTO.  The Director has an important role.  He or she leads on intellectual property policy, advocates for the USPTO before Congress and sets a tone for how aggressively Examiners apply patentability standards to reject applications.  To continue the impressive rate of patenting in the US, the USPTO very much needs a new Director, and soon. 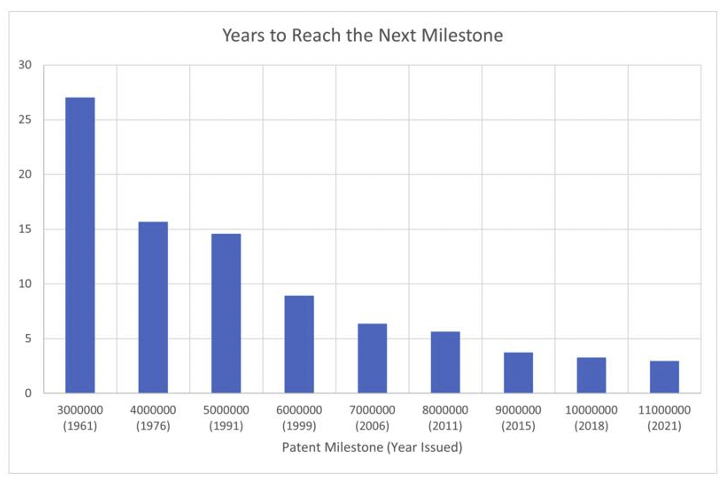 More from the AskPat® Blog

Only Humans, not machines, can be inventors of patents in the US

Thaler claims to own an artificial intelligence “AI” software system named DABUS, which is an acronym for “Device for the Autonomous Bootstrapping of Unified Sentience”.  Thaler further claims that DABUS conceived of two patentable inventions, one for a fractal-shaped...

Starting Tuesday, June 7, 2022, the US Patent and Trademark Office will begin issuing only electronic trademark registration certificates, accessible through the website https://tsdr.uspto.gov/.  Trademark owners will have the option to request paper “presentation”...

Congratulations to Kathi Vidal – our new Director of the US Patent and Trademark Office!

Kathi Vidal was confirmed by the United States Senate as Undersecretary of Commerce for Intellectual Property and as Director of the United States Patent and Trademark Office (USPTO). Kathi will lead the USPTO’s 13,000+ employees and its nearly $4 billion budget. She...